Overall, a wonderful learning experience for our Year 12 students who described the experience as:

Jiwan:  The presentation could have been a bit longer, but overall, everything was good.

Michelle: Watching ‘Pride’ in an environment that limited the amount of distractions around really helped with the immersion of the film. With the added lecture, it made retaining the information more easier and enjoyable.

Gordon: The presentation could’ve been more interactive with the students but being able to watch the film ‘Pride’ and given an explanation and comparison between the two studied texts was very helpful and I personally would recommend these kinds of presentations.

Mark: Seeing the movie on a big screen enabled me to see elements of the film that I would normally miss and therefore allowed me to enjoy the film more. The lecture also helped me better understand the similarities and differences between the film and memoir.

Amira: Watching the film in a theatre was a great way to watch it and we were able to hear the music that was played a lot better, and the lecture that was paired with the film gave some elements on the similarities and differences between the memoir and the film and the ideologies as well, but it could have been a little longer.

Riarne: I liked how there was an analysis presentation paired with the film to help gain some insight on the elements and messages behind the film.

Huda: The environment where we watched the movie limited distractions, and enhanced noises and sounds made us more intrigued, whilst the lecture clarified and retained information and events we just watched during the movie and did a good comparison analysis/summary of the text and movie.

Aya; the movie was good to watch because we saw what people went through to achieve their rights and they had to fight not just for their rights but other people.

Rukaya: The lecture was well done but if only it went more into depth with the analysis, when watching “pride” it would’ve been preferred to highlight significant moments.

Theresa: I enjoyed ACMI because it helped me with my English studies. The lecture was an amazing summary and analysis of the themes of both texts. Thank you to all English teachers who organised this event. 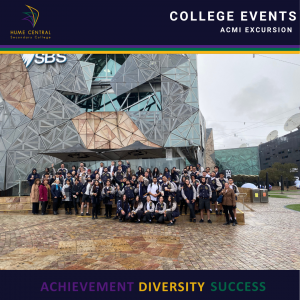 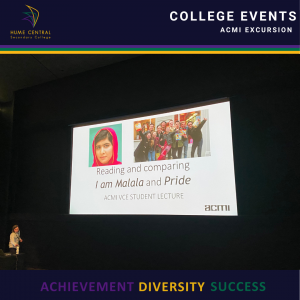 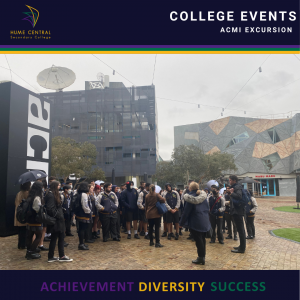 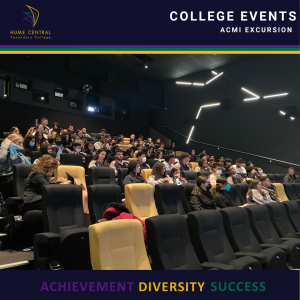