Iswa Chaudhry joined Hume Central Secondary College in 2011 after arriving to Australia as a recent migrant from Pakistan. She graduated in 2015 and began her Bachelor of Applied Science (Psychology) at RMIT in 2016. She then completed Honours in Psychological Science at The University of Melbourne and is currently pursuing her Doctorate in Clinical and Forensic Psychology at Swinburne University; she was a recipient of two scholarships at both these universities. Iswa’s research focuses on family violence in culturally and linguistically diverse communities in Australia.

Throughout her education journey, Iswa maintained a role in the PSD program at Hume Central Secondary College. As part of her current doctoral degree, Iswa has also completed her placements across a range of clinical and forensic settings, including a Psychology Clinic, Forensicare, and Headspace. She has recently accepted a role as a Forensic clinician at a private psychology organisation. She endeavours to work as a psychologist (clinical and forensic), a researcher, an academic, a policy advisor and an advocate. 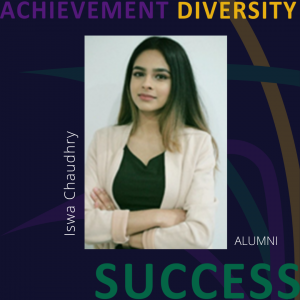